KORYN HAWTHORNE RELEASES DEBUT SINGLE “WON’T HE DO IT”

“Won’t He Do It” is the feature track on OWN’s Greenleaf: Season 2 soundtrack available this fall. 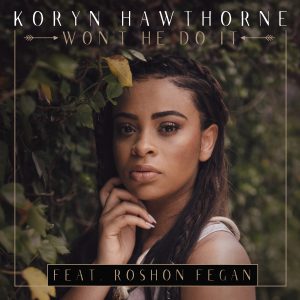 Nashville, TN (July 21, 2017) – Today, singer Koryn Hawthorne releases her debut single on RCA Inspiration, ”Won’t He Do It,” produced by Rich Shelton, Makeba Riddick-Woods and Matthew Head. Showcasing her confident voice with the artistic delivery that has garnered Koryn widespread praise among both her peers and her fans, she’s considered one of the most exciting new voices for her generation. “Won’t He Do It” is only just the beginning of a line of new music to come.

“This particular song is so catchy and fun and I can’t wait to perform it,” Koryn says of the bouncy track written by Grammy®-nominated songwriter, Makeba Riddick-Woods (Beyoncé, Rihanna, Jennifer Lopez).

The song’s contagious beat and relatable lyrics remind us to have faith and trust God, despite our circumstances. It is sure to be a long lasting, feel-good favorite from the songstress, who signed with RCA Inspiration in 2017.

“Since signing Koryn to RCA Inspiration, it’s been a thrilling creative process working together with her in developing her voice, sound and image as a new artist for her first major project. Our team is excited to share Koryn Hawthorne’s new music with her fans and with the industry,” says Phil Thornton, Senior VP and General Manager for RCA Inspiration.

“Won’t He Do It” is the lead single from OWN’s Greenleaf: Season 2 soundtrack and is also featured on Koryn’s upcoming debut, self-titled EP which releases on August 4th.

The 19-year-old, Louisiana native who captured the country’s heart as a top 4 finalist on The Voice season 8, is poised to take the gospel world by storm. If her former coach, Pharrell Williams’ opinion is any indication, her incredible work ethic, stellar vocal skills, and inspirational attitude, all which are beautifully showcased on the upcoming EP, will take her far.

The soulful singer with undeniable vocal chops is serving up moving and powerful material. Pair this with her eclectic style and powerful delivery, and she is sure to reach more fans than ever.

“I don’t put myself in a box. The sound is universal, even if it’s considered ‘gospel,’” she says. “This music can touch anyone and everyone, no matter their walk of life.”