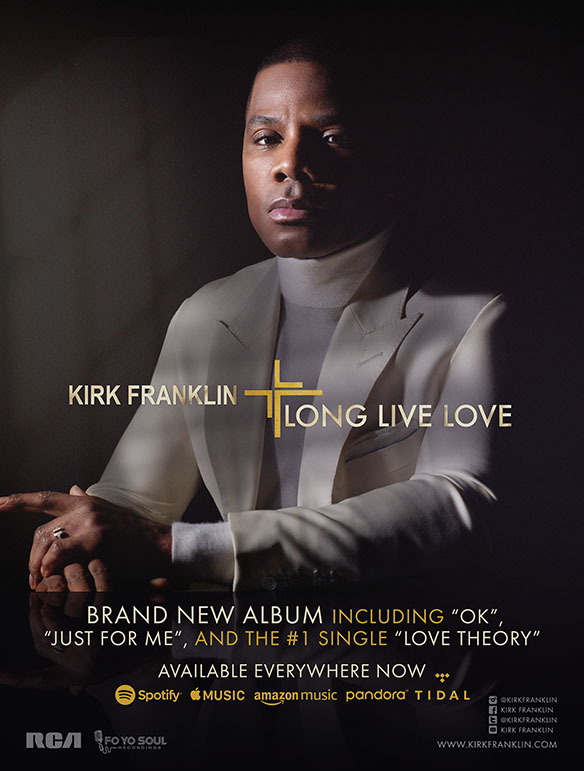 Showcasing Franklin’s signature sound, the album’slead single “Love Theory” has held the #1 spot on Billboard’s Hot Gospel Songs chart for 17 weeks straight. Also a crossover hit, the infectious ode to God is currently #4 on the Billboard Adult R&B Songs chart. Recently, Franklin introduced a new single from LONG LIVE LOVE entitled “OK” and premiered its accompanying music video. “Love Theory” and “OK” are among the album’s ten beautifully crafted tracks that are sure to uplift the listeners’ spirits.

To help celebrate the release of LONG LIVE LOVE, Franklin is hosting listening events at churches across the country in cities including New York City, Philadelphia, Los Angeles, Chicago, Atlanta, Augusta and Nashville. Additionally, he will kick off the 26-city LONG LIVE LOVE Tour on July 11th in Austin, TX. And he will return as host of the ninth season of the music competition show Sunday Best when it premieres on BET on June 30th.

With over 26 years in music and countless awards and accolades under his belt, Franklin is just as excited about LONG LIVE LOVE as he was about his very first project. He says, “Every album is my first album, the butterflies have never left”.

To connect with Kirk Franklin and for additional information, also visit: