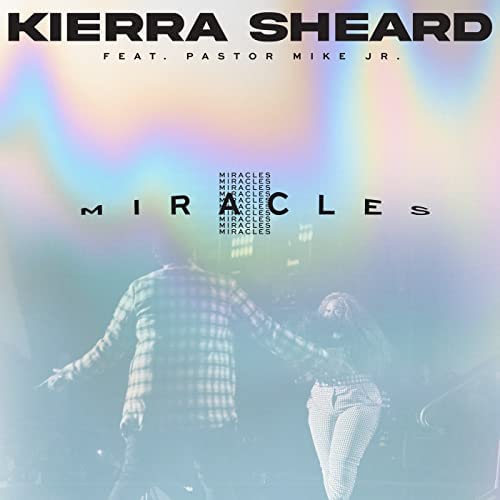 Nashville, TN (September 30, 2022) – Chart-topping recording star, actress and entrepreneur Kierra Sheard, releases her new single and music video for “Miracles” feat. Pastor Mike Jr. (Karew Entertainment/RCA Inspiration). Available now, “Miracles” is the first single from her upcoming album set to release in 2023. Her new album will mark Kierra’s seventh studio album, following KIERRA-Deluxe, which featured the two #1 Billboard Gospel Airplay hit singles “Something Has to Break” (feat. Karen Clark Sheard) and “It Keeps Happening.” The “Miracles” music video premiered on the BET Her and BET Gospel networks, and showcases Kierra Sheard and Pastor Mike Jr. in a robust live performance of spiritual empowerment, recorded in Atlanta last year at Praise In The Park. The lyrics transcend us beyond any doubts or worries we have, to carry a strong belief in God’s power and love to lead towards a more positive outlook.

Kierra Sheard has been singing professionally since the age of nine, growing up surrounded by music as the daughter of Gospel icon Karen Clark Sheard, from the legendary family group The Clark Sisters. Kierra continues her family’s legacy in music and ministry, carrying out her own path as an artist at their company Karew Entertainment. The multi award-winning singer/ songwriter’s music following includes over 63 million audio streams, and career accolades include five #1 Billboard Gospel albums, four #1 Billboard Gospel Airplay singles, a GRAMMYⓇ Award, three Dove Awards, and six Stellar Awards.

In addition to music, the actress and fashion influencer starred in The Clark Sisters and Line Sisters Lifetime movies, authored a memoir, Big, Bold, and Beautiful and helms her Eleven60 clothing line. Most recently, she appeared as herself in an episode of the BET+ show, “Kingdom Business.” Kierra continues to support the SistHer Mentorship community, giving back to her hometown of  Detroit. She wants to continue spreading the message of miracles through charity and partnerships with local organizations. For more with Kierra, catch up with her Katching Kierra YouTube channel, for a behind-the-scenes look into her life, from beauty, style, travel, to cooking, family, music, and more. Check out “Miracles” now at the links below.

To connect with Kierra Sheard, visit: